The History of Orgonite

Orgone was the name that the psychiatrist Dr. Wilhelm Reich (1897 – 1957) used to denominate the vital energy, also known as “Qi” (Japan), “Chi” (China), “Ether” (Greece) or “Prana” (India). The existence of a “universal life energy” that is in all of nature was accepted with little contestantion, even in the scientific community, until the 19th century, when scientists started to question their existence. Nevertheless, some discoveries made in the 20th and 21st centuries, conducted by some pioneers, led for a new interest in this life energy. That’s when Dr. Wilhelm Reich appears.

Dr. Wilhelm Reich was born in the old Austro-Hungarian Empire, back in 1897. After a rough adolescence, in which he loses is parents, and with the beginning of the 1st World War, Wilhelm had to flee to Vienna. After the end of the war, em 1918, he enter the University of Vienna to learn medicine. It was in 1919 that he met Sigmund Freud, that rapidly became his mentor. But the ideas of Reich regarding the sexual nature of energies led to some disagreements between him and Freud. 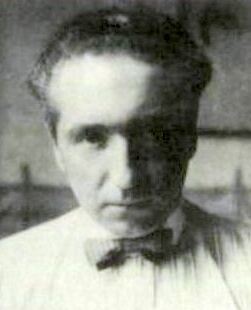 Wilhelm Reich with around 25 years.

His experiments included the use of a galvanometer that allowed his to discover that our skin has an electric charge when we found ourselves in pleasant situations, to which he called bioelectric energy. Later on, he discovers energy vesicles he called bions. The vesicles made a kind of radiation that charged the surrounding objects. Finding that this radiation was the same bioelectric energy he already found, he then called the energy of Orgone.

Wilhelm Reich builds his first Orgone Accumulator, also known as ORAC. It was made of plywood lined with rock wool and sheet iron. The intention was to generate a strong concentration of positive orgone, that would have a healing effect.

In 1951 he builds his first Cloudbuster, which is a device made of hollow metal tubes he believed were capable of pushing negative orgone energy from the atmosphere. During the drought of 1953, 2 farmers asked for his help, so that he could make it rain. According to an anonymous witness, the rain started pouring at the end of the day, saving the plantations. 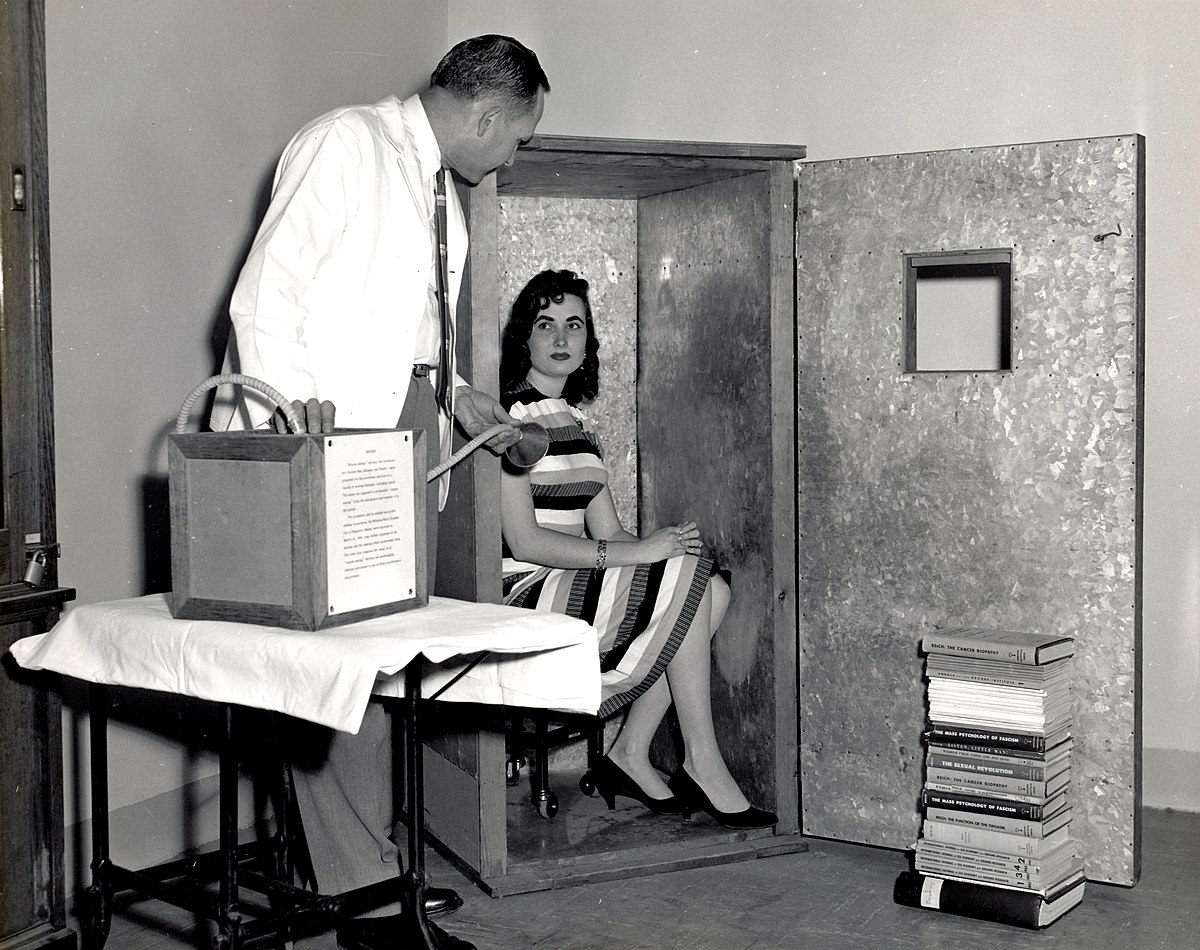 This event was enough, back in 1954, for the FDA (Food & Drugs Administration) to release a permanent injunction that prohibited the sell of Orgone Accumulator. In March 19 of 1954 a judge ordered that all accumulators, parts and instructions to be destroyed, and that several of Reich‘s books that mentioned orgone be withheld.

The culmination of this court order occurs in 1956 when, after one of Reich‘s associates sent parts of an accumulator by mail to another state, in complete violation of the decree by the FDA. On June 5, 1956, two FDA officials went to Reich laboratory to supervise the destruction of accumulators. On June 26, agents returned to oversee the destruction of all promotional material, including 251 copies of Reich‘s books. On August 23, 6 tons of Wilhelm Reich‘s books, journals, and papers were burned in an incinerator in New York. 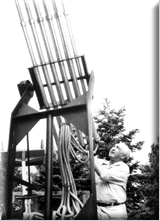 In March of 1957, Wilhelm Reich is arrested and on November 3, 1957, he is found dead in his cell, completely dressed except for the shoes. According to his will, he is buried in Orgonon, in his laboratory in Maine, USA.

If you want to find more about the life of Wilhelm Reich, check out the Wikipedia, by clicking here.

The origin of Orgonite

It is probable that Orgonite as we know it today has been around for longer than we know. One of the first time a very similar device was mentioned was by Franz Bardon (1909 – 1958), a hermetic practitioner that had a lot of experience in the occult and in healing. Bardon was sent to jail for 3 years by the Nazis for denying to reveal esoteric information. In his 1956 book, “The Practice of Magical Evocation”, he makes a refence to a device called “fluid condenser” capable of storing etheric energy. These condensers can be solid, liquid or aeroform. The solid condenser was made of mixture of 7 planetary metals (lead, tin, iron, gold, copper, brass and silver), coal and resin, practically the same ingredients used today in an Orgonite.

Orgonite, as we know it today, was made by the austrian Karl Hanz Welz. In the year 1991, he improved Wilhelm Reich design of a Orgone Accumulator by creating a device made of resin containing metal particles. Unlike Reich‘s ORAC that accumulated both Positive Orgone (POR) and Dead Orgone (DOR), Welz‘s “orgone generator” transformed DOR in to POR. It was then that he named it Orgonite. He later trademarked the name, however he did so only in 2005, nearly ten years later when the word had already become a commonly used generic term. It was in the beginning of the 21st century that Don and Carol Croft improved the original formula of Orgonite, by adding a crystal in the resin-metal mix. The Quartz crystal, with its piezoelectric effect, amplifies the energy and helps transform the Dead Orgone (DOR). Some believe that orgonite without a quartz crystal will, over the long term, become an orgone accumulator, which can be harmful if it is placed in an area heavy with DOR.  The Crofts were also pioneers in the orgonite gifting movement, which has now spread worldwide.

Based on these teachings, in 2016, comes Orgone4Life.

We began by making personalized wedding souvenirs and handicraft fairs in the Lisbon area of Portugal.

In 2017, we finally open our website with a store that send’s Orgonites to the whole world.

This website uses cookies to improve your experience while you navigate through the website. Out of these cookies, the cookies that are categorized as necessary are stored on your browser as they are as essential for the working of basic functionalities of the website. We also use third-party cookies that help us analyze and understand how you use this website. These cookies will be stored in your browser only with your consent. You also have the option to opt-out of these cookies. But opting out of some of these cookies may have an effect on your browsing experience.
Necessary Always Enabled
Necessary cookies are absolutely essential for the website to function properly. This category only includes cookies that ensures basic functionalities and security features of the website. These cookies do not store any personal information.
Non-necessary
Any cookies that may not be particularly necessary for the website to function and is used specifically to collect user personal data via analytics, ads, other embedded contents are termed as non-necessary cookies. It is mandatory to procure user consent prior to running these cookies on your website.
SAVE & ACCEPT
error: Content is protected !!